The outside of the bucket was a dull and faded yellow.  The cracked paint made it look old and crusty.  The inside was clean as a whistle.  It hung on two nails in the wash house on the farm where I grew up.  Sixty years later it’s a memory of who I am and where I came from. 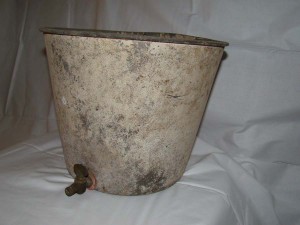 I was born in April of 1944.  We lived on a farm in Milford Township in Story County, Iowa.  World War II was in progress.  Food and supplies were rationed.  Times were tough.  That Fall, my dad’s landlord decided he wanted a son-in-law to farm the land so we had to move.  In December of 1944 we moved about 5 miles to a farm in Grant Township of Story County.  The new farm was a mile west of Nevada, Iowa.  My Uncle Art returned from the war in Europe in December of 1945 to see his first nephew, now 20 months old.  My dad would rent this farm and till the land until his retirement in 1983.

In my mature adult life I remember the farm as a great place to be a kid.  Lots of places to play, explore, and have fun.  From an early age I had chores. One chore I remember was feeding the work horses.  Dad owned a tractor but some of field work was still done with horses.  Dad preferred to plant and cultivate with horses because it was easier to get the horses to go in a straight line than it was the tractor.  Manually steering a tractor was hard work in the days before power steering.  Dad put the horses in the barn at the end of the work day and my job was to give each horse several ears of corn to eat.  I walked from the barn to the double corn crib and pulled four ears of corn out of the slats.  It was all my little arms could do to cradle those ears of corn and carry them back to the barn.  My dad arranged the feed bunks so I could feed the horses without getting in the same pen with them.  I remember how big they looked to me.  I pushed the ears up and off my chest and into the feed bunk.  I made trips between the barn and corncrib until each horse had been fed.

The farm house was a two story house.  Mom’s kitchen had a range stove in it.  Heat for cooking and warmth was provided by burning corn cobs.  The kitchen was the warmest place in the house in the winter.  There was a summer porch on the south side of the kitchen with screens and a big door.  There was always a breeze blowing through the kitchen in the summer with the windows open, and sometimes in the winter with the windows closed.  That house was a cold and drafty place in the winter.  The range stove always had a fire in it and the warm kitchen was a comfy place to be.

There was a sink in the kitchen.  We didn’t have running water but the sink could be filled with water from a hand pump next to it.  The water came from the cistern next to the house.  The cistern was about twenty feet in

diameter and about 20 feet deep.  Rain water from the roof of the house was collected in the cistern and ground water also seeped into the bottom of the cistern.  The cistern and the outdoor well provided our drinking and washing water.

Just off the kitchen was a dining room and a living room.  The oil burner that provided heat was in the dining room.  In

the winter mom put a copper wash tub next to the oil burner and filled it with warm water.  My brother and I took our bath in that tub. Upstairs were two bedrooms.  My brother and I had the south bedroom and Mom and Dad had the north bedroom.  It was cold up there in the winter.  That old house was built before insulation was part of the construction process for a house.  It was actually one of those houses where you could write your name in the frost on the walls on those bitter cold mornings of an Iowa winter.  There was a root cellar.  The only entrance was outside the house on the other side of the cistern. A huge potato bin was in the cellar and the food mom canned during the summer was stored in that root cellar.

The cellar also served as our shelter from severe thunderstorms and tornados.  I remember being woken in the middle of the night, scooped up in my dad’s arms while my mother carried my little brother.  Out the door we went.  Dad pulled open the cellar door.  Mom and my brother went down. I was put down so I could walk down the stairs while dad held the door in the wind.  The single light bulb dangling from the ceiling cast shadowy light on the cellar.  When the electricity went out, the cellar was like a dark dungeon.  My brother and I often became scared of the loud thunder.  The folks would always tell us the loud noise was just God dumping his potatoes in his bin.  We looked over at our potato bin and it made sense to a couple of pre-school kids.  Even into our early adult life the folks told us “little stories” in an attempt to protect us from reality.

There was also the path.  Like most farms, there was no running water, so we used an outhouse for a bathroom.  We had a two holer.  Next to the house was the wash house (pronounced worsh in this part of Iowa).  It was a small building used for washing clothes, separating the cream from the milk, washing the cream separator parts, and storing corn cobs for mom’s range stove.  It was also the place we bathed when the temperature allowed.  The well was just outside the wash house.  The handle was long and I was short. I couldn’t get a full stoke but I could pump water out of the well by hand.  It was good water that tasted especially good on a hot summer day.  The yellow bucket hung on a nail in that wash house. 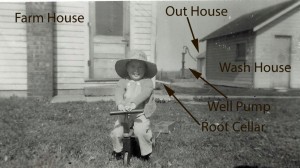 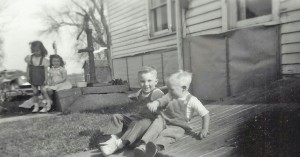 Cistern, well pump, and cellar door.  Cousins Dorothy Wokoun Yeakley and Sandra Brownfield Deems in back ground, Me and Gale on cellar door.

The crusty old bucket had a brass spigot on the bottom of the bucket.  When the spigot was opened a small stream of water, about the size of a wooden pencil, came pouring out.  The bucket hung on two nails at the top of the wall. Mom would heat a pail of water on the range stove.  Dad would pour that pail of warm water into the crusty bucket, open the spigot, and step under it.  At full open the stream lasted 3 minutes and 20 seconds. That was Dad’s shower in the days before running water. He would get wet, turn the spigot off, lather up with soap, turn the spigot on and rinse off. Two or three buckets of hot water were required after hot and dirty jobs on the farm. 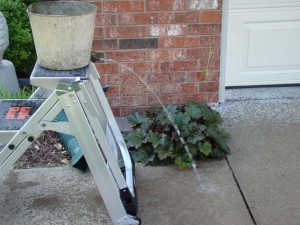 The new house was to be built in the same place as the old house.  In the fall a moving company jacked up the old farm house, moved it about a hundred feet west, and placed it in the middle of my mother’s garden.  Cribbing was stacked about three feet high and the house was lowered onto the cribbing.  There was nothing under the house.  The cold and wind blew over, around, and now under the house. My dad stacked bales of hay around the base of the house to help keep the wind out.  But in reality there was nothing between us and the cold but a wooden floor covered by a thin layer of linoleum.  The chamber pots, kept in the downstairs closet so we didn’t have to use the outhouse during the night, froze solid.  I still remember how cold that house was that winter.

During the winter my dad helped build the house.  After the morning livestock chores were done, dad would work for the carpenter until it was time for the night chores.  The carpenter liked dad’s work.  For several winters after that Dad worked as a carpenter to supplement the farm income.  We moved into the new house in the spring of 1952.

In the basement there was a shower with hot and cold running water.  We didn’t have to bathe in a copper boiler or under the pencil stream of the shower bucket.  The basement shower was simple.  A hot and cold valve was mounted on the wall with a tall curved pipe with a shower head on the end.  The water ran into a floor drain.  A piece of pipe was bent in a hoop and plastic shower curtains were hung from the pipe. It was a dream shower.  My brother and I thought we had it made.  We used that shower until we moved away from home.

On top of that red cabinet was that yellow crusty looking shower bucket from the wash house.  It just fit between the floor joists and the ceiling.  It just sat there all those years.  How it missed the occasional cleaning out of the basement I’ll never know.

The first, and only, house my wife and I bought had a wall shower in the basement. It was similar to the one I grew up with.  Nothing fancy, just a shower hanging from the basement wall.  The water went down a near by floor drain.  I formed a ten foot piece of electrical conduit into a hoop and hung shower curtains from it.  It was just like being back on the farm.  I lived in that house for 36 years, 5 of it after my wife died, and used that shower everyday, well almost everyday.  I preferred it to the fancy shower in the whirlpool tub of the upstairs bath.

Now, 50 years after leaving the farm, the bucket is a constant reminder of the “good-ole-days” on the farm.  I recall the pencil stream of almost warm water from the shower bucket and appreciate the hot water from the big shower head I can linger under in my current home.

When my folks retired from the farm my brother confiscated that shower bucket before dad could throw it away.  Today that faded and crusty shower bucket is among the antiques that decorate his home.  Most call it an antique but I call it a fond memory of growing up on an Iowa farm.