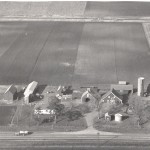 My brother and I grew up on a farm in Grant Township, Story County, Iowa.  Our summer weed wars were great fun for us.  However, they were a constant sore point with our father who believed work was a serious endeavor.  He tolerated our weed wars, to a degree, because he needed our labor.

In 1945 our father was recruited to be the renter of a farm in Grant Township, a mile west of Nevada, Iowa.  He was recruited based on his reputation for being a good farmer with a vengeance for weed eradication.  His new landlord was assistant dean of agriculture at the University of Minnesota.  It was a toss up which one most detested weeds.  In the winter of ’44 – ’45 we moved from Milford Township to Grant Township.  In the spring of ’45, as I reached my first birthday, my father began his tenure on this farm and that tenure lasted until his retirement in 1983.

In the ‘50s weed control was accomplished by mechanical cultivation and manually pulling weeds.  Herbicides were just being created and were not in wide spread use. The ones that were in use would also kill young corn and bean plants so they were mainly used for fence rows and ditches.  Tractors, with cultivators, covered fields twice in June and sometimes again in early July.  After cultivation we walked the fields pulling weeds that were in the middle of the row, out of reach of the cultivator.  The larger weeds were cut with corn knives (machetes).

The weed wars were fought at two levels.  The first was the global level.  Our father wanted to eradicate every weed in every field.  This war was to eliminate the weeds from the farm.  The farm was infested with button weeds.  According to legend, every button weed seed pod has 100 seeds and one seed grows every year.  If the seed is buried deep in the soil, it will wait until it is dug up and then grow.  It was our father’s obsession to eliminate button weeds and put an end to the 100 year scourge.  There would be no more seed pods reaching maturity on his watch.  The second was the localized war between my brother and me.  There were many battles and skirmishes in the localized war but never a winner.  This part of the war was conducted in the bean fields.  This war used weeds to provide recreation and entertainment that was often mistaken for mischief.  Our father was not real supportive of this war.

My brother and I hated walking beans.  It was hot hard work and we got little sympathy from our father.  We sought diversions.  Our favorite was finding a big black and yellow spider with a web stretched between two rows of beans.  We would use the flat side of the corn knife to swat the spider.  A good swat required stealth with an accurate and aggressive swing of the knife.  These were fat and juicy spiders and they made a loud splat that left a big gooey mess on the corn knife.  Being boys, we sometimes wiped the mess off on the leg of our jeans.  Our mother was not happy about that.

As we walked and walked we had many valid excuses we constantly verbalized to our dad.  I’m tired and need a rest; my feet hurt; it’s hot out here; these rows are longer than yesterday; it looks like rain; my shoe string broke; I’m thirsty; I got a thistle sticker in my finger; my corn knife is dull; it’s almost time for dinner; it’s almost time for supper.  We pleaded and begged but to no avail, dad kept us walking and pulling weeds.  However, our constant complaining eventually did some good.  When our children helped their grandpa walk beans, he was a lot easier on them than he was on us.

The walking was endless.  The first time through was in June.  Each of us took two rows. We had to watch the inside of our two rows plus the outside of the row of the person next to us.  My brother and I would occasionally miss a weed but our father never missed any of his or ours.  He would holler at us, point out the missed weed, and chide us to pay attention.

The walking was just endless, just endless.  The first walk was in late June. During the second walk we took four rows and baked under the July sun.  During the third walk in August we took six rows as the dog days of summer drug on and on.  The miles and miles of walking were endless.  Most of all we dreaded the south 80.  That 80 acres was a quarter mile wide and a half mile long; twice as long as most of our fields.  So we walked and walked.  My brother and I would walk over 30 miles to complete that 80 acres.  Most years we had 150 to 200 acres of beans to walk.  No wonder I hate walking for exercise.

My brother and I invented weed wars to battle the boredom and fatigue of walking beans.  Two things had to occur to begin a weed war.  First we had to have the right kind of weed.  The weed of preference was a weed we called a coarse weed (proper name is pig weed).  A weed about shoulder tall was ideal but a waist high weed would do.  These weeds had straight and rigid stalks and made a good weapon.

The second thing was that our dad had to be walking in front of us so he could not see us.  He was intense about looking for weeds.  My brother and I did not suffer from that affliction.  If dad was intensely focused on weeds and we were quiet, we could conduct a weed war.  We had to be crafty and plan our attacks on each other.  Prime coarse weeds were not always plentiful.  Sometimes we had to resort to the bountiful button weed.  The wimpy stems made aerodynamics terrible but they were better than no weapon.  When we found a good coarse weed it might need to be cut, trimmed, and stashed for future use.  That future was the next pass through the field.  When a coarse weed was not visible an attack was not expected.  A sneak attack could yield great results.

The weapon, the coarse weed, was cut with the corn knife.  The ideal cut was at a sixty degree angle.  This produced a sharp point at the end of the stalk. The next cuts were to carefully cut all the branches off the stalk without nicking, or weakening, the stalk. With the branches cut off and a big end sharpened you had an ideal spear.  All the time you are doing this, you let your brother get ahead of you.  So taking careful aim, you chucked the spear across the field at your brothers back.  If you were really lucky, a second prime target was presented if your brother was bending over pulling a weed when you chucked the spear.

Once the spear was let loose, one of two things happened. There was a hit or a miss. Either result had repercussions.  If it was a miss, the spear would be retrieved and returned, just as it was delivered.  The spear was chucked back and forth until there was a hit or we got caught.  If it was a hit, usually there was a verbal response.  Often in words our mother would not like to hear.  There were seldom injuries.  It was an injury if blood was drawn but bruises, scratches, and minor cuts didn’t count as an injury.

The first time or two this happened we would get yelled at, but that didn’t bother us.  My brother and I were known to fight like brothers.  Our father’s threat was “If you boys can’t behave, I’ll send you to the bean field,” but we were already there.  Except for a beating, there wasn’t much harsher punishment and when walking beans we seldom got a beating; dad needed our help.

When we kept at it, our dad took a position between us to keep us separated.  At this point we were required to keep up with him.  There was no falling behind or being out of his sight.  Depending on how ornery we were that day, or if we had been for several days, there were other repercussions.

The smallest would be an extra round that day or an extra round before we took a break.  Stronger would be an extra hour or two in the field.  This was an early application of our father’s disciplinary philosophy.  He felt if he worked us hard enough we would be too tired to get into trouble.  As we got older, and started driving, he applied the full force of that philosophy.  Sometimes it worked on me but seldom worked on my brother.  He was too much like our father.  In my young life I heard enough stories about my dad, and from my dad, to know he did not want his sons to follow in his youthful footsteps.

Walking beans was a pain in the butt.  However, it helped form our character.  It might be where both of us got the beginning of our perseverance.  Today, 60 years later, I still dislike walking anywhere.

One of the great injustices arrived when our kids walked beans with their grandpa.  They got to take many breaks.  If it was too hot they quit early.  Grandma brought many goodies to the field for them to eat and drink.  They got paid money.  My brother and I never got one cent of pay.  Lucky for them our father saw the error of his ways and had softened over the years.  Our kids never appreciated the sacrifice my brother and I made for them.  Grandkids never understand how easy they have it.