We weren’t your normal catechism class of well behaved kids.  We often lived in that gray area.  This is our story as I remember it.

As our class formed in September, the minister and his wife announced their retirement at the end of the school year.  Our class, already known for less than perfect behavior, saw that as an opening for even less good behavior.  This group of kids didn’t need much of an opening and we had found one. 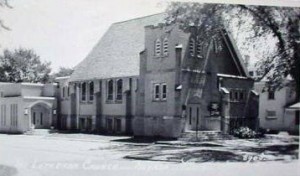 My catechism class became very well known during our confirmation year.  To say that we were ornery, boisterous, and misbehaving kids would be an understatement. Our ministers wife taught the confirmation class.  Our class contributed many grey hairs to her head.  Our class was instrumental in helping them confirm the decision to retire was correct.

We were underachievers in the area of the workbook skills but there were things we paid attention to.  We did pay attention to lessons on communion.  Everybody, even us ornery kids, knew that communion was serious stuff.  You had to do everything just right.  You could only stand in certain places; you had to look serious; and you had to execute all the right motions.  This was the period of time when rituals and the rules for participating were very rigid.  Rigid rules like never placing anything on top of the Bible were of paramount importance to our elders.  You were forbidden to write in your Bible or otherwise mark pages.  You might go to Hell if you did “bad stuff” like that.  Many of us could not understand why our elders were so serious about these rituals (remember we were the beginning of the flower child and hippy movement).  However, we understood that we needed to pay attention when they were explained.  We also understood that in public, you better respect these rituals.  We also understood the statement “Just wait until your father gets done with you.”  So when it came to communion, we all paid attention and came to understand the meaning of communion in the Lutheran Church.

So the whole class of kids, mostly ornery but with a few angelic girls, came to be confirmed by reciting a Bible verse and communing in the best tradition of the Lutheran Church.  In our new suits and new dresses we stood up straight and smiled like angels.  We performed the rituals according to their time honored rigid rules.  We understood baptism and communion and that they were the two sacraments of the Lutheran Church.  We knew Luther’s Small Catechism was a book we could read anytime, why memorize it.  We were not the classic Lutheran Church catechism class, but we turned out ok anyway.  The minister and his wife went into a happy and well deserved retirement.  We all went on to graduate high school with a class motto of “We will find a way or we will make one”.  As we aged and navigated the road of life, we have done just that.  And yes, the Lord works in mysterious ways.