A simple invitation to attend church nurtured my family for more that 30 years.  This is that story.

A simple invitation sustained our family for more than 30 years.  In 1974 we moved into our first house

We were a family of four and had been living in a 12 X 65 mobile home.  Our home was in a mobile home court in Cedar Falls but we were in the Hudson school district.  We had been looking for a home in Hudson for two years.  Our youngest son was already attending school in Hudson.  Maxine and I were involved with the local Jaycee chapter. The chapter was very active in civic activities.  The volunteer work was a great help in getting acquainted with couples of our own age.  A couple we new from Jaycees were being transferred and needed to sell their home.  Housing in Hudson was in great demand and the couple was kind enough to allow us to have first chance at it.  The home was everything that both of us wanted so we made an offer and it was accepted.

Shortly after we got settled into our new home.  Norm Armstrong, another Jaycee member, extended an invitation to us to attend St. Timothy Lutheran Church.  Maxine and I had become good friends with Norm and Dianne.  Norm and I both married Norwegians so we compared notes on how to understand them.  In our house, Dianne became known as the “other Norwegian”.

Norm was involved with the church council.  He told me the church was in the process of changing Pastors.  He said the congregation was small but very friendly and inviting.  We decided to consider Norm’s invitation.

Since we had been married Maxine and I had not attended church on a regular basis. When we were first married we lived in a farm house south of Cedar Falls for a couple of years.  We went “home” most weekends to see family and friends.  Two years later we moved to a farm house south of New Hartford.  Living in the country didn’t permit much social contact and we didn’t make a lot of friends.  We only had one car and I drove it to work.  The social isolation was a concern for Maxine.  We finally scraped together enough money for a second car so she wouldn’t
have to be alone at home all the time.  After the farm we moved to a the mobile home court.  That move allowed us to have some social contact on a frequent basis.  However, regular church attendance was not part of our lives.  We were so busy raising two kids, building a career, and trying to make ends meet that we used Sunday’s as a catch up day.

We decided we wanted to start attending church again and it was time to get the kids into Sunday school.  Maxine was always the spiritual backbone of the family.  Once we decided to attend St. Timothy, it was on a regular basis.  She would not accept excuses on Sunday morning.  We got up
and went to church.  Maxine and I joined the adult Sunday school class.  The class met in the very small kitchen at St. Timothy.  It was a cozy class with a group of very nice people.  We all felt comfortable discussing our beliefs and religion.  We discussed many things that helped us grow spiritually and helped us learn how to live life.  I really miss those Sunday school days.  After the new church was built, that class was never the same.  When St. Timothy moved into the new church, the Lutheran church began all their studies about mergers, homosexual relationships, inclusiveness, and other social issues.  These subjects became the discussion topics for the adult class and drug on and on and on and attendance dropped like rock.  Eventually, the class ceased to meet. 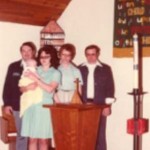 After Maxine died, I attended St. Timothy a few times over the next year.  It was difficult to set in “our pew” without her. 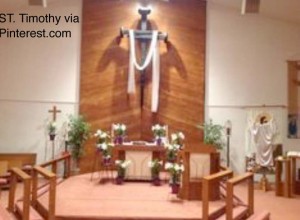 The good friends that always set next to us were very kind and always helped me with the difficult emotions.  St. Timothy has a very commanding cross at the front of the church.  That cross made me feel like I was in the presence of God.  The cross is formed by three nails.  Two of the nails are crossed over the third nail.  The nails were hand crafted by a blacksmith.  The shape of the nails is historically correct for the nails used to crucify Jesus Christ.  Even with the commanding cross, I was troubled by visualizations of two caskets at the front of the church.  It was hard for me to pay attention or have a worship experience.

I decided I needed a change of scenery and started looking for a new church.  I was guided to Bethlehem Lutheran Church in Cedar Falls.  That guidance is a story unto itself.  Part of that guidance was several invitations to join the Bethlehem congregation.  So after more than 30 years, I ended my regular attendance at St. Timothy.

If you don’t attend church, consider this your invitation.  If you do attend, extend an invitation to someone.