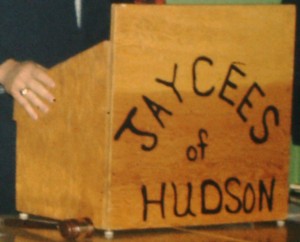 In 1973 I joined the Hudson Jaycees.  The Jaycee Creed guided my life and the Jaycee ring symbolized two important characteristics of my life.

The Jaycee Creed And The Ring

The Jaycees offered many leadership development programs and I took all the training programs that were offered.  The training included practical applications in the form of community service projects in Hudson and northeast Iowa.  The leadership training would have a profound impact on my personal life, my career at John Deere, and my life as a firefighter and EMT.  Much of what I was able to accomplish in life was a combination of the leadership training, and the undying support and encouragement from my wife Maxine.

The Jaycee’s had a creed.  In Hudson that creed was recited at the end of every meet- ing.  Some of our meetings became infamous in Hudson.  We were all young.  The mandatory retirement age was 36.  We were strong headed, opinionated, and vocal.  It was common for members to passionately support their position on a subject.  Standing on a folding chair with raised voice and jesters was an ordinary means of expression.  However, regardless of how heated the debate was at a meeting, we were all pulled back together with the reciting of the creed.

The creed was easy for me to agree with because it reflected many of my beliefs.  It was a creed that I came to hold dear.  The creed has been a guidepost in my journey of life.  I included the creed in a writing I did for my children.  I titled the writing: “Stratton’s Advice for Life’s Journey.”  The writing was a collection of one line philosophy and prose.  Collecting them was a hobby of mine and one Christmas I gave all of my kids a copy of that writing.

The Jaycee Creed banner was hung in the meeting room at the old city hall (corner of Eldora and Jefferson). It read as follows: 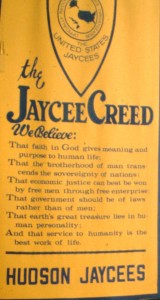 That faith in God gives meaning and purpose to human life

That the brotherhood of man transcends the sovereignty of nations

That government should be of laws rather than of men

During my membership in Jaycees I held a number of offices in Hudson and the Region III Jaycee organization.  When I reached the mandatory age of retirement at age 36, I was ready to retire.  I had been very active and I was nearing burn out.  Maxine and I had created our “second” family by adding a boy and a girl.  Maxine and I were taking EMT training and I was serving my third term on the city council.

As I prepared to retire, the Jaycee ring came into my life.  When I graduated from The Technical Institute at Iowa State University I did not get a class ring.  There just wasn’t money for that sort of thing.  I had lost my high school ring.  Maxine had worn that ring when we were “going steady.”  After I gave Maxine an engagement ring, I started wearing my high school class ring.  I had lost a lot of weight after high school because Maxine and I were living on love.  One fall day I was helping my dad plow on the “40 acres”.  The weather was cool, but not cold, and I was not wearing gloves.  My hand was on the hydraulic lever constantly adjusting the depth of the plow.  Unnoticed, the ring slipped off my finger and was lost forever.  I think Maxine was the most upset about the loss of the ring.

When I retired from Jaycees, Maxine gave me a Jaycee ring.  It was a total surprise to me and I was very appreciative.  The ring looks very much like a college class ring.  The ring was gold with a blue stone.  The ring contained engravings and two inscriptions.  One side is inscribed “Faith in God” and on the other side is “Service to Humanity”.  Those two inscriptions reflect the life that Maxine and I tried to live.

In October of 1981, Maxine was one of two women voted into membership on the Hudson Fire Department.  The first time women had been allowed to serve.  I had joined in April and we served together for 17 years until Maxine retired in 1998.  I continued for another 9 years.  We regularly attended St. Timothy Lutheran Church in Hudson.  We attended adult Sunday school and tried to grow our spiritual lives as individuals and as a couple.  Community service and faith in God were part of the foundation we built our lives upon.

As I began my career as a firefighter, I wore the Jaycee ring and my wedding ring.  Training sessions about firefighting and rescue operations encouraged us to remove our rings.  Wearing rings created a high risk of finger amputation.  I had never removed my wedding ring.  However, I finally saw enough pictures of firefighters with amputated ring fingers that I decided to remove my rings.  I used the firefighter’s tradition of wearing a necklace with my wedding ring on it.  It was out of the way under my shirt but it was always with me as a reminder of Maxine’s love.  I put the Jaycee ring in my jewelry box.

I wore my wedding ring and the Jaycee ring on special occasions.  Both rings were a symbol of Maxine’s love for me.  After Maxine’s death, our wedding rings were retired to a spot in the curio cabinet.  I still wear the Jaycee ring on special occasions.  The inscriptions remind me of what is important in life and how Maxine and I tried to live our lives with “Faith in God” and “Service to Humanity”. 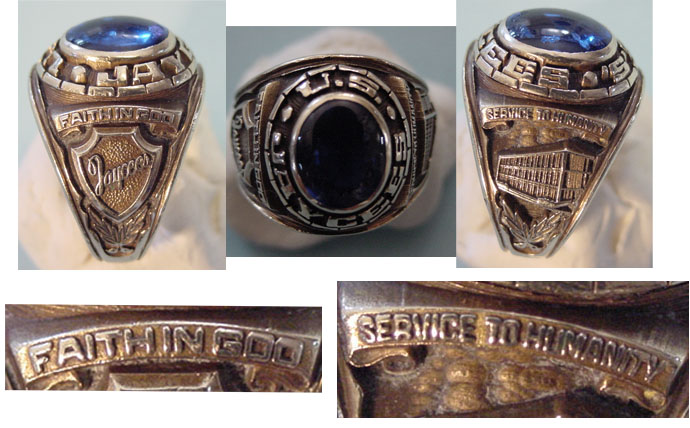