This is the story of Maxine being the spiritual leader of the family.

From the time I met Maxine her spirituality was evident.  The winter of ’61-’62 was a tough winter.  We missed many days of high school in February and March due to snow storms.  Every Sunday that travel was possible, Maxine went to church at St. Petri in Story City with her family.  On Sunday’s when not everyone could go, someone from the family tried to be in church.  At the time, nether me, nor my family, was attending church on a regular basis.  In school we were in some classes together but we knew very little about each other.  Maxine and I had started dating in February of 1962.  So here two Lutherans had met and would soon fall in love.  It was the beginning of a 43 year journey on the road of life.

Maxine had a deep seated faith in God.  She was never very verbal about it and never “preached” to others.  When things were tough, it was her quiet and confident nature that communicated her faith in God without ever saying a word. She always had confidence that things would “work out”.  Maxine’s mother Elizabeth also had great faith and she had instilled that faith in Maxine.

Maxine’s father was diagnosed with cancer shortly after we were married.  After Galen was born, we tried to go to her parents as often as we could so Haak could see his grandson.  Maxine handled the cancer and her fathers death with great faith.

When Maxine’s mother Elizabeth had a stroke, Maxine again demonstrated her strong faith in supporting her mother.  Maxine’s mother used the Bible to recover her speech. She worked and worked at reading the Bible out loud to regain her speaking voice.  It took a long time but she was determined and never gave up.  It was during this time I came to understand where Maxine’s determination and never give up attitude came from.  Maxine was her mother’s daughter.  Elizabeth made a very significant recovery from the stroke.  She appeared to be doing well but then she was stricken with cancer. Maxine and her mother were very close.  When Elizabeth died, Maxine again demonstrated her deep faith in her quiet actions and unspoken words.  It was amazing how Maxine could communicate her deep faith to me without ever saying a word.

In 1974 we moved to Hudson.  We were invited to join St. Timothy Lutheran Church and we did.  We had been married nine years and were not regular church goers.  However, when we joined St. Tim’s that changed.  Maxine’s Norwegian determination kicked in and we began attending regularly.  There were no excuses, or Danish stubbornness from me, that could deter Maxine for getting all of us to church on time.  Maxine was well known for being late but she was not late for church.  We were never very early but we were seldom late.  Maxine and I began attending adult Sunday school and together we began to grow our spirituality as individuals and as a couple.

As we grew in age and maturity, Maxine continued to be the spiritual leader of the family.  When Maxine was diagnosed with cancer we both fell back onto our faith and our understanding that it was all part of God’s plan.  We didn’t like that plan at that point but knew it was God’s plan.

Maxine again demonstrated her deep faith in her quiet actions and unspoken words.  As the two of us chose a Bible verse for our headstone, we both cried.  The words were from 1 Corinthians 13:13. “and now faith, hope, and love abide, these three; and the greatest of these is love.”  These words truly reflected Maxine’s spirituality.  She loved everybody and every living creature.  She always had faith and hope and was able to communicate them without using words.  I have always felt it was ironic that a girl born on Friday the 13th lived her life according to 1 Corinthians 13:13.

Maxine gave unconditional love.  When I was growing up, unconditional love was something I had seldom experienced.  My father would not allow emotions to show or surface in him or others in the family.  I grew up in one of those families that did not physically show love or verbally express love.  Until my mother was in intensive care near the end of her life, I had never seen my dad kiss my mom.  If you had a roof over your head, clothes on your back, and food in your stomach, well, that was love.  If you performed a task very well, you might be told “that was pretty good”, but that was essentially the maximum emotional statement in the family.

Maxine had the Christian perspective of love.  Her love was unconditional even during those times when I didn’t really deserve it.  Her love was continuous.  Maxine was forgiving and taught me how to forgive.  I had not grown up with forgiveness.  Anytime someone had done a wrong to my father, that wrong was remembered forever.  Anytime your work or performance did not meet my father’s expectations, you were reminded of that for a very long time.  Perfection was just expected in every aspect of your work and performance.  There were no excuses.  Maxine taught me and our family to share the joy, the work, and the troubles.  She taught us that trying to be perfect all the time was futile.  But she did have times when she expected perfection of herself.  Her sewing was one of them.

Maxine’s approach to life was different than the one I grew up with.  I grew up in a family where there was women’s work and men’s work.  The two were distinctly and forcefully separated and the line was never crossed.  Maxine grew up in a family that shared everything, especially the work, and there was no such thing as women’s work and men’s work.  Maxine was a teacher because I was always “in training” as she molded me into a better person.  I retired from John Deere in December of 2001.  We were going to be spending a lot more time together.  Maxine reminded me that I was still “in training” and she would have more time to work on me.  She, like God, wasn’t done with me yet.  It was Maxine’s spiritual strength, unconditional love, patience, and Norwegian persistence, that allowed her to spend 43 years training the person she loved.

Maxine was always content with who she was, where she was at, and what she had.  I admired her for that and I continue to struggle to be more like her.  Most of what I am today, and what her children are today, is due to her unconditional love and her persistence to never give up.  Whether it was during good times or terrible times, she never gave up on her God, her faith, or her family.

Maxine was able to instill her strong spirituality in me and in her children.  We have been able to continue on life’s journey after her death.  Once when asked what her greatest accomplishment was on Earth.  She replied, without hesitating, “Raising my children to be respectful honest citizens.”  Maxine’s faith, hope, and love now abides in all of us.  We miss her terribly but we are comforted that she is with God, her parents, her brother, and our daughter Kim.  We will see her again in the next life.  Until then, she lives on in all of us. 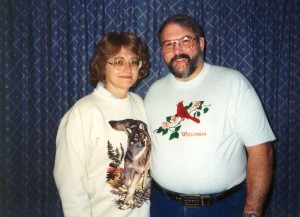