On the third Saturday of May 1993 I touched a sequoia tree that had been alive when Jesus walked the earth.  The Holy Spirit just came over me and flow into me.  The story of Jesus became alive to me.  This is the story of that day.

The Sequoia Tree and God

I visited Sequoia National Park in California on the third Saturday of May 1993.  I touched a giant sequoia tree.  Touching that tree brought God closer to me than any other experience on my journey of life.  The reality of a living God flowed into me from a living tree.  A tree that had been growing before Jesus walked the Earth.  It was like no other experience I had ever encountered before.  I was forever changed for the better.

In May of 1993 I was working in California doing test work on John Deere tractors.  The test was physically and mentally challenging.  I was working with bleeding edge technology to acquire data that had never been acquired in that way before.  It was hot.
The temperature reached 102 degrees.  To add to the difficulty, the air conditioner on the test tractor broke down.  To save costs a cannibalized tractor had been resurrected. The tractor wasn’t a piece of junk, it just looked like it.  The tractor was functional but not all of the features worked.  It was a major accomplishment to get the tractor to run, so loss of the air conditioner was taken in stride.  We just opened all the windows and made do with what we had.

I was working with George and Eileen.  I was in charge of conducting the test, of the data acquisition, and of the data analysis.  George was in charge of making all the data acquisition equipment work.  Eileen was consulting on the data acquisition and analysis because she would be the end user of the data.  Eileen and I had met in November of 1987.  A new test group was being formed to conduct accelerated lab testing.  Eileen, a six year employee, came from the hydraulics group.  I came from the design group with twenty-two years of experience.  We had never met before.  Over the next few months and years, we formed a bond.  Eileen coached me on hydraulics and vibrations which were areas I was weak in.  I coached her on how to manipulate the continuously changing road of office politics and corporate culture.  I shared my knowledge of tractors and farming.

Our friendship is a prime example of the Holy Spirit at work.  People are brought into your life for a reason.  We bonded and became best friends forever.  We helped each other with the trials and tribulations of work in a big company and with the problems of life.  It could only be the Holy Spirit at work that would bring a city girl from Washington, D.C. and a country boy from Story County Iowa together in a deep and long lasting friendship.

The test site manager’s name was Butch.  Butch and I had known each other since almost before green and yellow paint.  The two of us traveled the USA in the ‘70s working on tractors for John Deere.  Butch and his wife Nadine offered to take George, Eileen, and me on a guided tour of Sequoia National Park on Saturday.  I had not had a day off in two weeks which was common for me when I was traveling and doing test work.  A chance to have a guided tour of the big Sequoia trees by Butch and Nadine was not to be refused.

On Saturday morning we set off in my rental van.  The day was a beautiful sun filled California sky just like a travel brochure.  We climbed the foothills of the mountains and stopped for breakfast.  The restaurant was next to a stream that was running rapidly and boiling over boulders.  It was a magnificent sight and sound.  The water was ice cold because the stream was all snow melt water coming down out of the mountains. The sound of the fast running stream was just intoxicating. 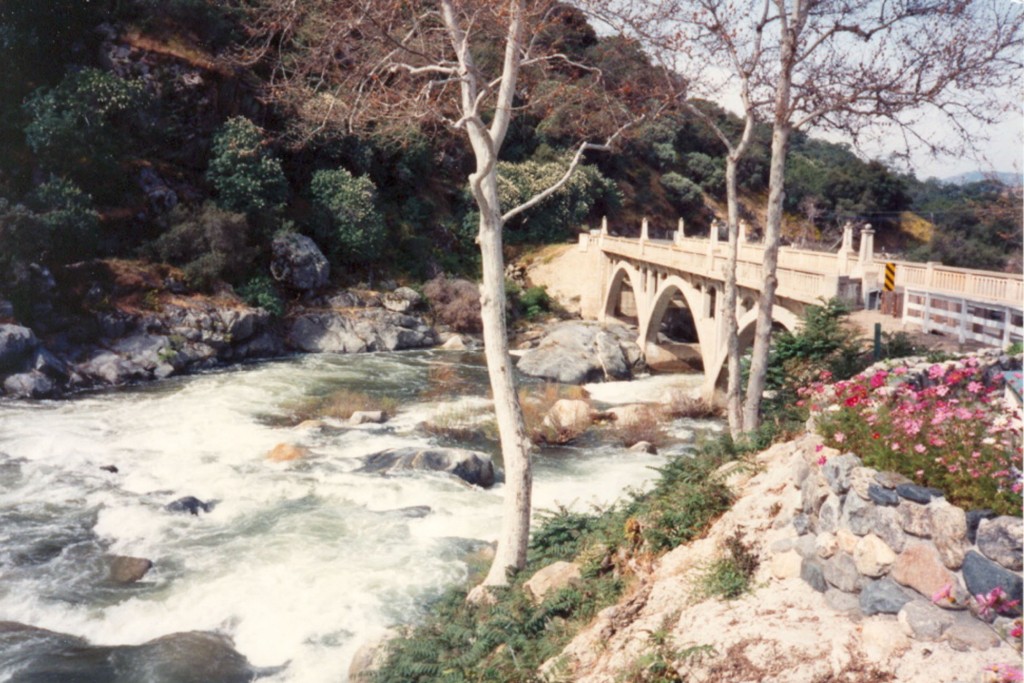 We continued into the mountains and stopped at some lookout sites.  We stopped at the visitors center and there, right in front of the van, were the giant Sequoia trees.  They are just indescribable.  Pictures don’t due justice to the size of these magnificent trees.  We each had our picture taken standing in front of one of the trees.  The sign said these trees were over 2000 years old.

I walked up and touched the bark of the tree.  It was then and there that it struck me.  I had just touched a tree that had been alive when Jesus walked the earth.  The Holy Spirit just came over me and flowed into me.  I was in awe.  One thousand nine hundred ninety three years was a long time and hard to visualize, but touching that tree changed all that.  Somehow the story of Jesus just became alive in me.  I had touched something that was actually alive for more than 1993 years; alive before Jesus walked the earth. 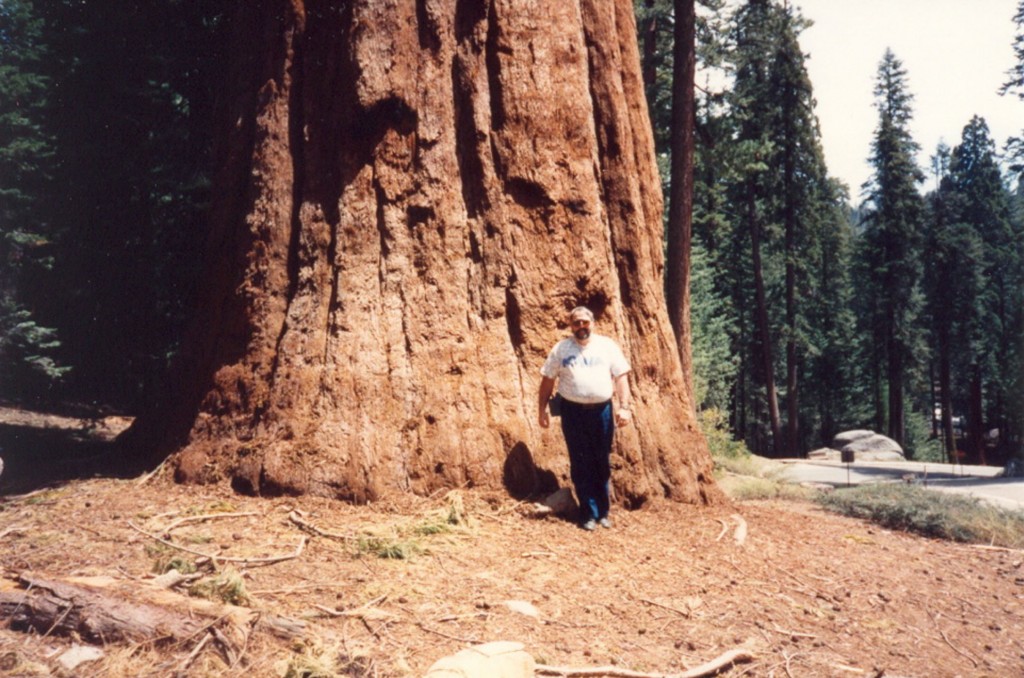 The excitement had set in and we looked for the next adventure. Being young and ambitious we decided to climb Morrow Rock.  My goodness the climb was a lot of steps. We stopped to rest a couple of times realizing our bodies were not quite as young as our mind thought they were.  Like most views from the top, it was spectacular and worth the strenuous climb.  We could view most of the sixteen switch backs of the road we took into the park.  It was no wonder some of us were beginning to experience motion sickness.  We were amazed the only safety rail was a small pipe railing.  Anyone could have easily fallen off the top of Morrow Rock.  We soaked in the view and the beauty. Looking across the vastness of the valley entrance we admired the white blossoms of the buckeye trees.  We took pictures and soaked in more of the beauty, then we descended back to the parking lot.

We toured the rest of the park and saw other stands of the giant Sequoia trees.  We saw vistas of magnificent snow capped mountains.  We stopped and admired the flowing waters from snow melt.  We played on the big piles of snow still remaining in May.  We picked up the giant pine cones and looked up at the tall red pines.  We immersed ourselves in the majesty of the mountains.  Eileen sat upon a big rock looking far off into the tall red pines and the mountains.  She was struck by the natural beauty and ruggedness of the mountain view.  Her thoughts turned to God and she was thinking, “What an imagination God has–how could so much variety be conceived and produced on one planet.”  I was wondering around looking at the vistas and the tall trees.  The air was cool and crisp and I just breathed it in.  I was letting the beauty penetrate my soul.  It was just an amazing day.  I felt different.  I had been “touched” by the Holy Spirit.  I felt good.  The day was special.

When I was traveling and doing test work, I seldom took a day off.  I was a seven day a week workaholic.  Because of my friendship with Butch and Nadine I had taken this day off but tomorrow, Sunday, it would be back to work.  George usually had Sundays off but I worked on data analysis and test planning.

On Saturday evening, we dropped Butch and Nadine off at their home and then we dropped George off at the motel.  As Eileen and I sat in the van in the motel parking lot, she turned her attention to Sunday.  She was in the drivers seat and I was in the middle of the first passenger seat behind the drivers seat.  Eileen was scheduled to go home on Monday.  She wanted to go to Yosemite National Park on Sunday and asked me to go with her.  I said no.  I told her I had already taken one day off this week and taking two days off was out of the question.  She told me I was working myself into the ground and I needed to take time off.  It was hard to argue that point but I insisted.  She continued to insist I go with her.  We sat there trading comments.

“You need to go”
“No, I already took a day off”
“Gary you need to take time to see some of the national parks when you travel”

“The work will be there on Monday”
“No, I don’t take two days off in a row”
“Gary you’re working too many hours. It’s not healthy”

Back and forth we went for a long time.
Then Eileen said “If you won’t go with me, I’ll rent a car and go by myself!”

The conversation went silent for a moment.  A very long moment.

I yielded and agreed to go to Yosemite on Sunday with Eileen. Nobody was more surprised than I.  I couldn’t believe I gave in but only Eileen could have gotten me to give in.  Any other person would not have stood a chance.  We would take my rental van and leave early in the morning.  Little did I know that Sunday would be an even greater experience.

Being an engineer, I needed an explanation as to why this encounter took place and why I gave in.  It would be many years later that I would come up with an explanation that satisfied me.  It was the Holy Spirit at work that day.  The Holy Spirit was at work on two people and on two Saints.  The explanation is another story.  Shortly I would be in a 13 step recovery program and on my way to becoming a better person.  It was a step in the process of Eileen and I changing from co-workers to best friends forever.  For me it was the first step in the adoption of Eileen as my sister.  Anyway, Eileen and I went to Yosemite on Sunday.  I had chosen friendship over work.  The day at Yosemite would be a spiritual experience that again changed my life forever and it is the next story. 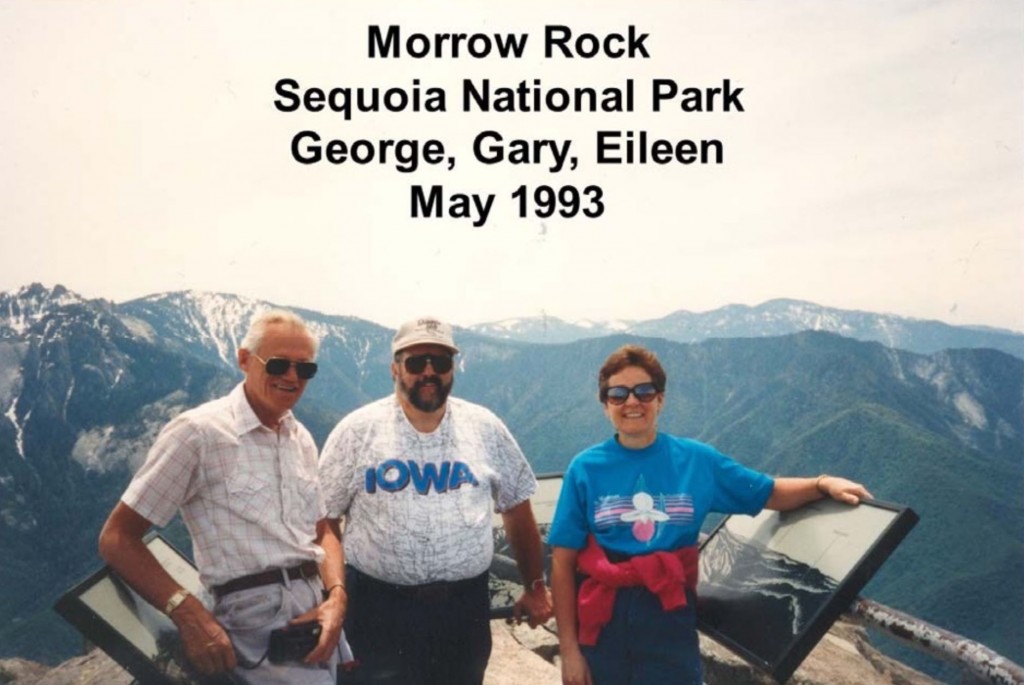