A handshake is an important part of the greeting and the departure for the men in my family.  I will remember this  handshake forever.

In August of 2004, Maxine and I attended a wedding in Chicago.  We decided to take a few days for vacation and continue to DePere, WI to see my cousin Marilynn.  Her husband had passed away in July and all of us needed to share hugs again.  Marilynn had invited me to attend a preseason Packer game.  I was looking forward to the thrill of seeing a game at Lambeau Field.

A few years earlier Marilynn decided to retire from her job as an occupational health nurse.  She moved her parents into her home and spent her time caring for them.  Her father was suffering from dementia.  Her mother was still self sufficient but unable to expend the energy to care for a dementia patient.

Marilynn’s dad, Art, was my favorite uncle.  He had been a mentor and guide.  As I grew up, he was the key figure in the development of my spiritual life.  He always put people first, ahead of work.  He was a member of many committees and organizations.  He was always doing something to help make his corner of the world a better place.  I aspired to be like Uncle Art.

Before Uncle Art’s dementia became severe, I stopped at his farm for a short visit.  I had been in Chicago for a conference and my inner voice had been nudging me to take the time to see Uncle Art.  He struggled with short term memory but he could recall growing up in Story County Iowa.  I knew bits and pieces of those times from stories my dad had told.  I asked Uncle Art questions about those days and he told me several stories.  I learned stories about my dad that I had never heard.  I made notes for the family history I hoped to write.  That visit was the last time we would be able to have a story telling session.

Whenever I walked into Marilynn’s house, Uncle Art would look up and smile at me. Something he didn’t always do when people entered a room.  Although he could no longer communicate, I thought he recognized me.  I was his first nephew and he spoiled me.  We had always had a close relationship.  I hoped that relationship caused him to smile.

My wife Maxine was a nurse and volunteered to stay with Uncle Art and Aunt Lois while Marilynn and I went to the Packer game.  We went with another couple and had a great time.  The excitement of a Green Bay Packer football game on the hallowed tundra of Lambeau Field is just one of the special experiences of life.  The Packer’s lost to Seattle, 3 to 21, but it was just a pre-season game.  The Pack would be back.

Every morning Uncle Art was helped on a bus and was taken to an adult day care center for dementia patients.  Most mornings he shuffled along as he went to the bus, never indicating he recognized any of us.  The morning Maxine and I were leaving to return home I was sitting in the kitchen, Marilynn’s favorite room in a home.  Marilynn was guiding Uncle Art through the house and towards the bus.  As he came through the kitchen we both looked at each other and smiled.  Then Uncle Art stopped and turned toward me.  He stuck out his hand for a hand shake.  I got up, walked across the kitchen, and shook his hand.  That was the last time I would see Uncle Art alive.  He passed away in November. 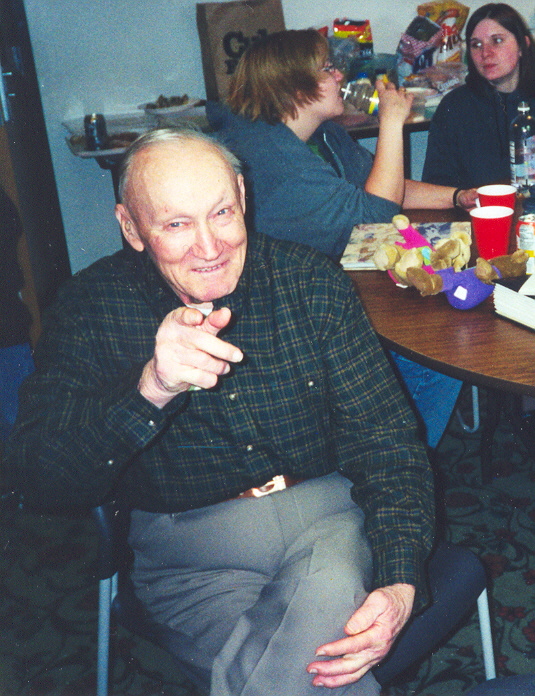