My father saw no reason my broken ankle should allow me to quit working around the farm.  Things changed when the doctor had to replace my cast.

I played football in Junior High and High School.  I played in eight grade, my freshman year, my junior and senior year.  My senior year was the only year I completed the season without injury.  In eighth and ninth grade I sprained an ankle.  In my junior year my left ankle was broken during a practice.

I liked my defensive tackle position and fending off blocks by the offensive linemen.  On this play my assignment was to plug the hole between the offensive guard and center. The practice field was soft from recent rains.  As I worked against the center the offensive guard slid off his initial block and moved to me and I got hit low in the left leg.  It wasn’t a hard hit, but the cleats on my shoe were firmly planted in the muddy turf and I heard something pop.  I flexed my foot and ankle.  There wasn’t much pain.  I was accustomed to sprains, and the pain that came with them.  Without much pain I figured I was okay.  I tightened my shoe laces, the standard procedure for sprains back then, and played the rest of the practice.  The five block walk back to the locker room wasn’t that bad and I figured I had a mild sprain. 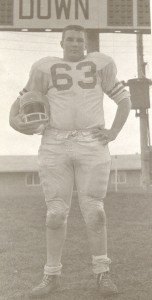 I went home and limped around a little, but there wasn’t much pain.  I did my homework and went to bed.  I awoke the next morning and got out of bed.  I took one step and promptly fell to the floor.  I didn’t play tackle because I was skinny and the thud shook the house, attracting my mother’s attention.  The ankle was in considerable pain and was swollen.  It was more swollen than with either of my previous sprains.  I told mom what happened in practice and off to the hospital we went.  The X-rays showed a hair line fracture just above the ankle.  That was the end of my football for that year.

The doctor ordered hospital bed rest with my foot elevated.  I was put in a hospital room with another kid from high school that was recovering from an appendectomy.  We were lucky.  The World Series was on and we had a TV in our room.  It helped pass the time of day.  The second day my pastor stopped to see me, “I heard you hurt an ankle” he said, as he grabbed my left ankle and wiggle it around.  I yelled out in pain. That was the closest I have ever come to cussing out a pastor.  He was apologetic but he smirked as he apologized.  Four days later the swelling had receded and the doctor put on a walking cast.  I was given instructions to take it easy and keep the foot elevated. 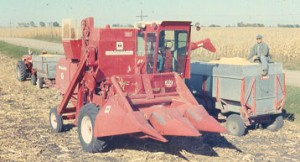 World Series time was also corn combining time.  Dad had a 303 International combine with a three row head.  We dried the corn in a John Deere 458 corn dryer.  My dad was a workaholic but during picking season he was especially intense.  He was always looking for ways to get more productivity. Picking season was long work days.  Dad was usually up at 3 a.m. and worked until about 9 p.m.  I usually had homework for school and I was still up when dad went to bed.  One of my jobs before I went to bed was to unload the corn dryer and start a new batch drying.  That load would be done when dad got up at 3 a.m.

Dad pretty much believed that unless you were dead you should be working.  I had a walking cast so he said I should continue unloading and loading the corn dryer before I went to bed.  If the ground was muddy, I wrapped a plastic bag around my cast.  Since I wasn’t at football practice there were other jobs I could help out with but driving a tractor with a broken ankle was out of the question.

Sometimes loading the corn dryer required climbing a 10 foot ladder with round metal rungs.  At the top of the ladder was an adjustment lever that allowed the auger to fill the dryer in a level manner.  Dad had me try climbing the ladder with the walking cast.  I climbed up and down the ladder without difficulty but slower than normal.  There wasn’t any pain so all seemed well.

I had been loading the corn dryer for several days and climbing the ladder when necessary.  One night I was part way up the ladder when I heard and felt my cast crack.  I carefully climbed down, finished loading the dryer, and went to bed.  The next morning I told mom my cast had cracked.  Off to the doctor’s office we went. 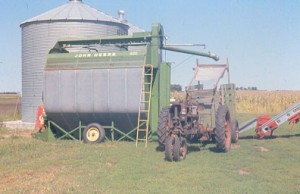 I told the doctor my cast had cracked and pointed to the place it was cracked.  The doctor looked at the cast, looked at me, looked back at the cast.  He said, “I’ve never had a cast crack in this location, what were you doing?”  I explained I was climbing the ladder on the corn dryer when it cracked.  The doctor replied, “This is a walking cast, not a climbing cast.”  He was not happy.  The doctor knew my dad and knew his work ethic.  The doctor gave explicit instructions to my mother to give to my dad.  This kid was to take it easy.  The walking cast was to get around with, to go to school, but not to do farm work.  I was not to be doing any ladder climbing or other farm work.  The doctor replaced the cast.

My mother made sure my dad got the message.  My mother was not often assertive with my father, but when her kids health and safety were concerned she didn’t back down.  Dad was not happy.  He felt I could be working.  My younger brother had to pick up my work plus keep up with his own work.  He was not happy but I was happy.  I had a new cast and I had time off from farming for a while.  By Thanksgiving I was mended and good as new.