This is a story about about a brief moment in time creating a life long memory.  Tap the off button on your electronics and go make a memory.

The last ten years I worked for Deere I spent a lot of time in Arizona and California.  I collected test data for use in laboratory testing. 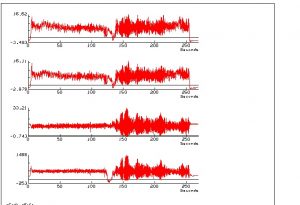 Anne utilized the data I collected.  On major tests, she would be in Arizona or California for a few

days to do a preliminary analysis of the data.  If she judged the data to be usable, I would spend several weeks collecting the balance of the data.  After a trip to Yosemite National Park in May of ‘93 I was convinced to reformed my seven days a week work schedule to six days a week by taking Sunday off.  Anne convinced me I needed to spend some time taking care of myself and soaking in the beauty of God’s creation.  Anne volunteered to be my mentor in the reformation of my work schedule, and I promised not to work on Sunday.

During my next trip to Arizona, I was working at the test site on a Sunday afternoon by myself.  My wife, Maxine, would usually call me on Sunday afternoon.  Because of our work schedules that was the only time of the week for us to spend extended time talking with each other.  I answered the phone in eager anticipation.  The voice on the other end said, “What are you doing working on Sunday?”  It was Anne.  I was busted.  After that I spent Sundays refreshing my soul with adventures in Arizona or California.   Some Sundays the adventure was just me and God.  Sometimes Anne joined us.

Typically I was in Arizona for two to three months at a time.  In the early part of my extended work adventures, I rented Dodge vans for transportation.  I’d remove the rear seat to make it into a pickup truck.  The middle seat became my computer center.  I take good care of my own vehicles, and I treat rental vehicles no differently.  I like to keep my vehicles reasonably clean.

Working in the fields of Arizona was hot and dusty.  Not dust like Iowa but a talcum powder type dust that gets into everything and sticks like glue.  In the early days of laptop computers, it was a weekly job to disassemble the laptop keyboard and clean dust from the keys.  Saturday afternoons became light duty time.   Time to pick up, clean up, and get ready for the next week.  Clean up included getting dust out of the inside of the rental van.

The test site had a four foot long custom made air wand.  Connected to the industrial air compressor, it was used for removing dust from tractor cabs and pickup cabs.  Being custom made, the nozzle on the wand had features most commercial air wands didn’t have. It worked great for removing dust, clods of dirt, and small objects from rental vans.

That Saturday afternoon I blew out the inside of the van.  Then, Anne and I headed for town as we talked about where to go on Sunday.  As we entered the west edge of town I turned into the car wash.  As I pulled into the stall Anne exclaimed, almost in shock, “What are you doing.”  “I’m gonna worsh this thing so it’s clean for tomorrow” I replied.  Then the conversation started as she said:

Anne paused in thought as I got a bunch of quarters from the change machine.  Then Anne said, “I don’t even wash my own van.”  I stared at her, and then she said, “God washes my van.”

We do get a lot of rain in Iowa, about 33 inches per year.  I grew up as a farm boy; I knew rain as nourishment for the crops.  I had never thought of rain as God’s car worsh .  You learn something new every day.  She helped me worsh the van still in disbelief I actually worshed rental vehicles.  The van was clean, and we were ready for our Sunday adventure.   (worsh is the Iowa pronunciation for the word listed in the dictionary as wash.  Anne, being from Maryland, used the dictionary pronunciation of worsh)

On Sunday we were out exploring Arizona.  We had made our way up through Oak Creek Canyon near Sedona.  We stopped several 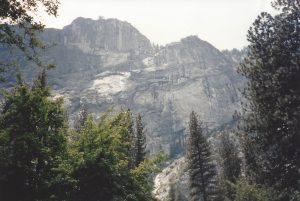 times to admire the spectacular scenery.  These were the days before GPS and cell phones.  The days when you could actually find peace and quiet.  We had a paper road map and were meandering toward Flagstaff.  This day I was driving and Anne was navigating.  She was a good navigator most of the time, except when emotions overcame her logical thinking.  Once in the mountains of California on a narrow and winding road she shouted “Look over there, look over there,” pointing to the left.  I looked.  She yelled, “Not you, you’re driving”…….  we were the only people in the van.  Who was she talking to?  My extremely brief look saw a breath taking mountain view.

On the way into Flagstaff, we were trying to decide which exit to take.  We were northbound on I-17, and the terrain didn’t allow us to see the area just off the approaching exit ramps.  I’m concentrating on traffic getting ready to exit right onto I-40.  At this point we are committed to the exit when suddenly Anne shouts, “NO, NO, STAY LEFT, STAY LEFT.”   I quickly check the rear view mirror, we are almost to the point of no-return, and I swerve the van to the left.  She continues to shout, stay left, stay left.  My foot stomps the accelerator to the floor, and the van, with its two occupants straining against the seat belts, makes the left hand turn from the right hand exit lane and gets back on I-17 with most of the wheels still on the ground and no paint exchanged.

I’m concerned she is shouting, uncommon, almost unknown, for her.  She is also very excited.  I ask, “Are you ok.”  She says “Yes, I saw a sign.”  “A sign for what?” I ask.  “They have, they have, Swiss Orange Chip ice cream” her excited voice responded.  “I whipped 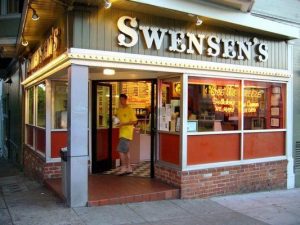 off the I-40 exit for ice cream?” I asked.  “But it’s Swiss Orange Chip” came her reply.  “Never heard of it,” I responded.  Well, Swiss Orange Chip was common in Maryland where she grew up and her favorite ice cream.  Since leaving Maryland, finding Swiss Orange Chip was a rare event.  Being a great navigator, she guided me and the van to the ice cream shop.  (Swenson’s Ice Cream 1800 S. Milton Rd, Flagstaff, AZ is no longer in business)

We settled into a booth;  Anne with her ice cream and me with my frozen yogurt.  She expounded on all the virtues of Swiss Orange Chip.  I had a taste, and it was good.  Due to lactose intolerance, ice cream was off limits for me.  As we visited, I reconfirmed my decision adopting this girl as the sister I never had.  It was mid-afternoon.  We did a quick tour of Flagstaff and started the three-hour journey back to our motel with fond memories of discovering Swiss Orange Chip ice cream in Flagstaff, AZ. 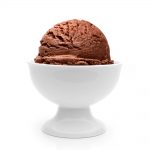